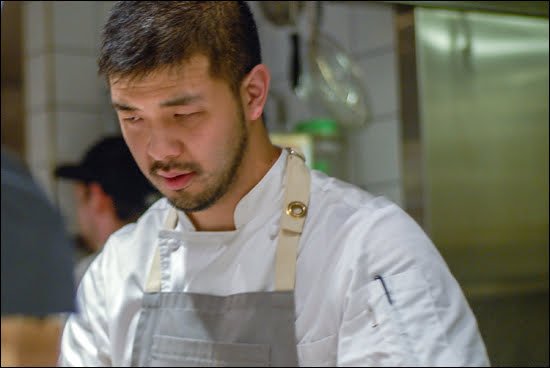 VANCOUVER, BRITISH COLUMBIA — When you taste the carrot cake puree, served alongside the tenderest of duck breasts, you realize that Makoto Ono isn’t only a wonderfully talented chef, he’s a fun-loving one, too.

Pidgin serves the sort of food that culinary travellers seek out around the world. It’s brilliantly creative and unusual, even in a city where you have some of the finest Thai, Indian, Chinese, and Japanese cuisines within steps of each other.

Along with the carrot cake and duck breast, connoisseurs will be intrigued by the Lamb Belly and the Octopus, cooked sous-vide and served with a delicious Sweet Potato Puree.

“I’m trying to be creative. I have Japanese sensibilities and French cooking style. It’s a blend of those,” says Ono, a friendly guy with an easy smile who is keen to maximize his talents.

He worked in Hong Kong prior to relocating to Vancouver and launching Pidgin in February with owner Brandon Grossutti. Raised in Winnipeg, Ono helped his parents run a sushi restaurant called Edohein, one reason he appreciates the ingredients he can source on the west coast.

“The product in Vancouver is so good,” Ono says. “You can’t ask for anything more. My goal is to be true to the ingredients but also make food that is an expression of who I am as a chef as well.”

Despite the quality of the food, the restaurant has had its challenges. It is on one of the most notorious streets in the drug-addled Gastown district. And while Ono and Grossutti have polished the spick interior to the point where you can easily forget the grungy atmosphere outside its doors, social critics have been vocal. Pidgin has been faulted for bringing a level of gentrification to the area that is out of step with the surroundings. To an outsider that attitude may seem strange, but there are many Vancouverites who possess a fierce sense of social justice and view any show of wealth as the beginning of the end of their low-income neighbourhoods.

Carrall Street is particularly unique. Across from Pidgin is a concrete square called Pigeon Park (the restaurant’s name speaks more to the fusion of East and West than to the landmark) that’s populated by drug users and the homeless. Pigeon Park is only three blocks south of the waters of Burrard Inlet and the touristy Water Street. But it is also only two blocks from the infamous corner of Main and Hastings, the epicentre of Vancouver’s drug problems. A walk on Carrall Street will alarm visitors unprepared for the poverty, drugs, and stark squalor in what is an otherwise beautiful downtown core.

Vancouverites have become acclimated to fine dining in Gastown, where chefs take advantage of low rents to create some of the most beautiful rooms in the city and offer excellent food at prices that would be multiples higher if served in tonier neighbourhoods like Coal Harbour, Yaletown, and Kitsilano.

Pidgin joins such great Gastown restaurants as L’Abattoir, Bao Bei, Wildebeest, and Nicli Antica Pizzeria as dining options that should be on any foodie’s list. It is the fine restaurant that is deepest into the drug culture, though, and visitors will need to be prepared for walking or driving into an atmosphere that can be uncomfortable, if not unnerving. One single female diner from Toronto told me she loved Ono’s food but the neighbourhood was too disturbing for her.

I can see her point. Parts of Gastown take a strong stomach. It’s easier if you go prepared for what you will see and understand that there are many people in Vancouver — rich and poor — who feel neither nervous nor threatened in this neighbourhood. That said, if you are going to be a victim of petty crime in the city, it’s likely to happen here.

With that caveat, it should be underscored that the location shouldn’t be a deterrent to visiting Pidgin. Use caution, take taxis, or come and go as a group and there shouldn’t be any issues. Once you give it a try, Pidgin is one of those restaurants where you’re likely to want to return. That’s the case for me.

Like anything artistic, there are textures in the cuisine at Pidgin that I suspect will take numerous encounters to truly appreciate. What I know after my initial visit is Ono’s menu is a triumph of creativity, a soaring statement in a part of town that can use any pick-me-up it can find.

Address: 350 Carrall Street, Vancouver, BC (see map below)
Reservations: Telephone 1-604-620-9400 or book on the restaurant’s website
Hours: Monday-Saturday, 5 pm-midnight; Sunday, 6 pm-midnight
Cocktails: Bar manager Robyn Gray has previously worked at the Rosewood Hotel Georgia and is a secretary of the Canadian Professional Bartenders Association. His drinks offer an education in cocktails as well as outstanding flavours. The Moscow Mule comes in a copper cup, an homage to the original drink, which was invented in 1941 in Manhattan and popularized in California. The cup was used to help the drink to stand out from the rest and make it enticing to try, because at the time it was one of the few cocktails to use vodka.
Menu Price Range: Share plates that range from $3 (an oyster in a shot glass with apple and horseradish, something you have to taste) to $29 (that exceptional duck with the carrot cake puree). Prix-fixe menus range from $35-$55. Here’s the full menu.
You Must Order: Of all the delicious items on the menu, the most pleasurable and addictive was a vegetarian dish: Mushrooms, sugar snap peas, a soft-boiled egg, and soy yuzu brown butter ($12).

A visit to the 'World's Best Hotel Spa'

PHOTOS: A day at the races in Toronto

A Fall Getaway to Kingston Made Easier with New Flight

NEW: "For Torontonians, a Fall Getaway to #Kingston Made Easier with an @iflygta Flight" by @travelmammal. 45-minute flight leads to explorations of Canadian history and 1000 Islands. https://vacay.ca/2020/09/a-fall-getaway-to-kingston-made-easier-with-new-flight/

It's #WorldTourismDay! Celebrate by leisurely perusing the http://Vacay.ca 20 Best Places to Visit in Canada for 2020 — with an emphasis on destinations with environmental leadership. http://bit.ly/Vacay20Best

NEW: "Leave It to the #HalfCorkedMarathon to Come Up with a Good 2020 Disguise" by @barnardfilm talks about how one of Canada's most unique events has found a way to bring its program on the road. @UncorktheSun @osoyoosbc
https://vacay.ca/2020/09/leave-it-to-the-half-corked-marathon-to-come-up-with-a-good-2020-disguise/