This 100-metre blast tunnel is the entrance to the Diefenbunker Museum. If nuclear war had broken out during the Cold War the plan was for the Canadian government to shelter within this facility. (Photo courtesy of Ottawa Tourism)

The Village of Carp packs a basket full of tourism goodies into its diminutive borders. Located 30 kilometres (18 miles) west of Ottawa’s Parliament Hill, Carp is home to plenty of stuff, including: a cozy cafe, a craft brewery located inside a historic pub, one of Canada’s most northerly wineries, a bustling arts scene, and a farmer’s market that connects visitors with the agriculture-rich Capital Region. Plus, the village has even been known to attract UFOs!

Most of all, though, Carp is renowned for a singular attraction — and you have to go underground to experience it.

With Cold War tensions between the United States and the Soviet Union escalating in 1959, Prime Minister John Diefenbaker commissioned the building of a bunker to house key members of the military and government in the event of a nuclear attack. It was later nicknamed the Diefenbunker but at the time was officially the Central Emergency Government Headquarters.

The Carp site, formerly farmland, was chosen because of its proximity to downtown Ottawa, ideal geological conditions for protection, and its geographic advantages in a valley. The four-storey Diefenbunker was designed to house 535 individuals and equipped for the government to safely operate in a subterranean environment for up to 30 days. Luckily in its 32 years of operation no bombs were dropped, and the Diefenbunker was decommissioned in 1994 and designated a National Historic Site. It reopened in 1997 as Canada’s largest Cold War museum.

Inside the entrance of the Diefenbunker is a replica of a bomb that was ready to be used against the Soviet Union during the Cold War. (Chris Ryall photo for Vacay.ca)

Life in the Diefenbunker

The Diefenbunker is a fascinating step back in time and an engineering marvel capable of withstanding a five megaton nuclear blast from 1.8 km (1.1 miles) away with its 32,000 cubic yards of concrete and 5,000 tons of steel. My self-guided tour, which included a recorded audio guide, sent me through the 100-metre (330-foot) cavernous blast tunnel. At the end of it, I made a sharp right turn to the thick entrance doors enforced with steel.

As I explored the utilitarian steel bunker’s hallways and rooms, it felt like walking below deck on a navy ship or even a prison. The audio guide’s commentary describes the facts and stories of life in the bunker.  I gazed into the War Cabinet Room and imagined the tension-filled discussions that took place among senior ministers and military officials. Nearby was the spartan Prime Minister’s suite with furniture and a bed more suited to a prison cell than a dwelling for the leader of the nation.

The rhythmic clack-clack sounds emanating from the Emergency Transmitter Room were critically important. During the 1960s to ’80s, teletype was the most secure method of communication for the military and government. The CBC Radio Broadcasting Studio room caught my attention. The studio was critical to communicating national emergency messages to all affiliated CBC stations via “black box” devices. I couldn’t help but reminisce as the radio equipment looked familiar to my early days in broadcasting. 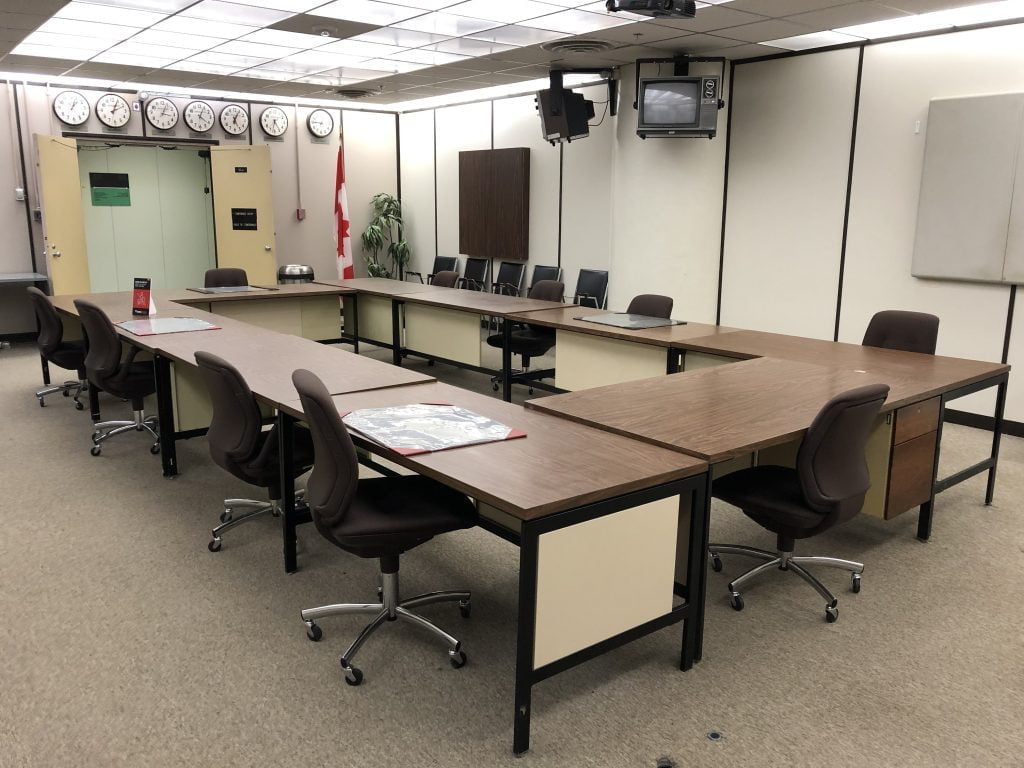 If war had broken out with the Soviet Union, the War Cabinet Room inside the Diefenbunker was where the Canadian government would have led the nation. (Chris Ryall photo for Vacay.ca)

The most heavily guarded and sealed room in the bunker is the Bank of Canada vault. The top-secret enclosure was known by workers as the “Special Storage Area” during construction. It housed Canada’s gold reserves. Opening the vault was no easy task — two people would first open a small door to equalize the pressure, and then four people with different combinations to four locks opened the vault’s main door. Mirrors in the corners provided a 360-degree view of the entire exterior structure.

In efforts to add normalcy, residents were allowed to go “up top” for ball games, winter carnivals, and a drink. Inside the bunker was a recreation area with pool tables, dartboards, and shuffleboard. Food was plentiful as supplies had to be stocked constantly in case of a threat. As one telephone engineer stationed in the Diefenbunker remarked, “Just in case the nuclear thing came and the government came, you know, you had to have good food and all that sort of stuff. So prime rib and things like this — we ate like kings.”

Interestingly, Diefenbaker never visited the bunker. The only Canadian prime minister who toured was Pierre Trudeau. He reportedly was not impressed by the facility and reduced its funding.

Diefenbaker and Trudeau may not have been interested but Hollywood came knocking. Part of the 2002 film “The Sum of All Fears” starring Morgan Freeman was shot in the Diefenbunker as well as many scenes from 2017’s “Zygote” featuring Dakota Fanning. The cafeteria in the bunker has also hosted many events and concerts.

Carp – Beyond the Diefenbunker

KIN Vineyards has tours, tastings, and special events. The vineyard also features a wide range of products from lavender body scrubs to hot sauces and jellies. It’s also a nice spot to kick back on a patio with a glass of wine. (Photo courtesy of KIN Vineyards)

Carp’s number one attraction may be underground but so are its roots — literally. Carp, with an estimated 2,000 residents, traces its beginnings as an agricultural hub. One of the more popular events, the annual Carp Agricultural Fair held every September, dates to 1863 and features exhibits, midway rides, musical performances, and even strongman competitions.

From spring to fall the Carp Farmer’s Market attracts locals and visitors every Saturday with a variety of vendors selling produce and local fare. Be sure to bring your breath mints and appetites for the annual Garlic Festival in August.

The Carp escarpment, with its grey limestone, and the Carp River create a distinctive terroir enabling the vines of KIN Vineyards to produce exceptional chardonnays and pinot noirs. Tours, tastings, and special events are held on the property’s 47 acres that are only minutes from Carp’s main street. KIN also sells a wide range of other products from lavender body scrubs to hot sauces and jellies.

Wine isn’t the area’s only beverage of choice. Alice’s Village Cafe is dubbed “Carp’s Community Hub” and serves a good cup of java and conversation. For those who enjoy a British-style pub, The Cheshire Cat will make your taste buds purr. Beer lovers will revel not only in the extensive selection of craft brews at Ridge Rock Brewing Company but its building that dates to 1893. Enjoy a local brew while surrounded by its colourful history that includes an original red neon clock that has been refurbished, railroad rails fastened to the bar’s bottom, and tables made from local wood.

Afterwards, enjoy strolling Carp Road and taking a peek at Moonstones Gallery and Marketplace in search of arts and crafts finds.

The Diefenbunker wasn’t the only thing that put Carp on the map. UFO sightings and the popular TV show, Unsolved Mysteries, helped. On November 4, 1989, Diane Labenek claimed to have seen a brightly lit craft land in a field near her home by Manion Corners, on the outskirts of Carp. A video sent by a person named “Guardian” reputedly showed the entire event. UFO researchers from Canada and the United States reviewed the video and documents. They debated over the authenticity of the video and sighting and even involved the RCMP in the investigation. Unsolved Mysteries aired two episodes on the UFO sighting in the early 1990s. The identity of Guardian has remained a mystery.

But there’s definitely no mystery to the historical and cultural treasures one can find in Carp — within a half-hour drive from Ottawa. If it’s good enough for aliens to visit from light years away, Carp is a destination well worth the attention of Canadians.

MORE ABOUT THE DIEFENBUNKER

Audio guides are available in eight languages  — even Inuktitut. You can also download the tour commentary to your smartphone. Check the website for information on Spycamps and the Escape Room.

COVID-19 Considerations: During the pandemic, various restrictions have been implemented. Visitors must book their tour block (whether guided or self-guided) in advance. Social distancing, limited group size, reduced hours, and some parts of the bunker are not accessible.

Village of Carp: Check Carp’s website and the individual places mentioned for their COVID-19 advisories and restrictions before visiting.

Where to Stay: Brookstreet Hotel is located less than 20 minutes away in Kanata and is a full resort with spa, restaurant, and recreation facilities. Check its website for reservations and any COVID-19 restrictions.

At a Fairmont Hotel in Vancouver, the Mayan Riviera Flies to You

Finding Inspiration in a Laundromat and Other Reasons I Miss Travel 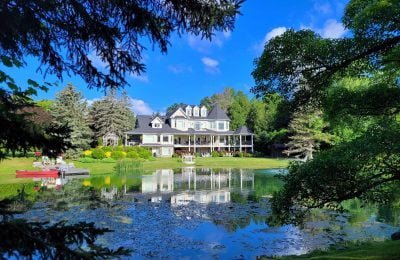 North of Toronto, a Getaway to Country Pleasures

B.C.’s Newest Wine Scene is Just One Hour from Vancouver

#Ayahuasca tourism has been in the news lately. Have you read our powerful first-person experience about a Canadian's exploration of the "spirit particle" in South America?

NEW: "Scallops & So Much More to Adore On the Acadian Shores" by @AdrianBrijbassi.

The #Vancouver #Polo Festival wasn’t horsing around this year — an Argentina theme with tango, Malbec & fancy fun under the sun.