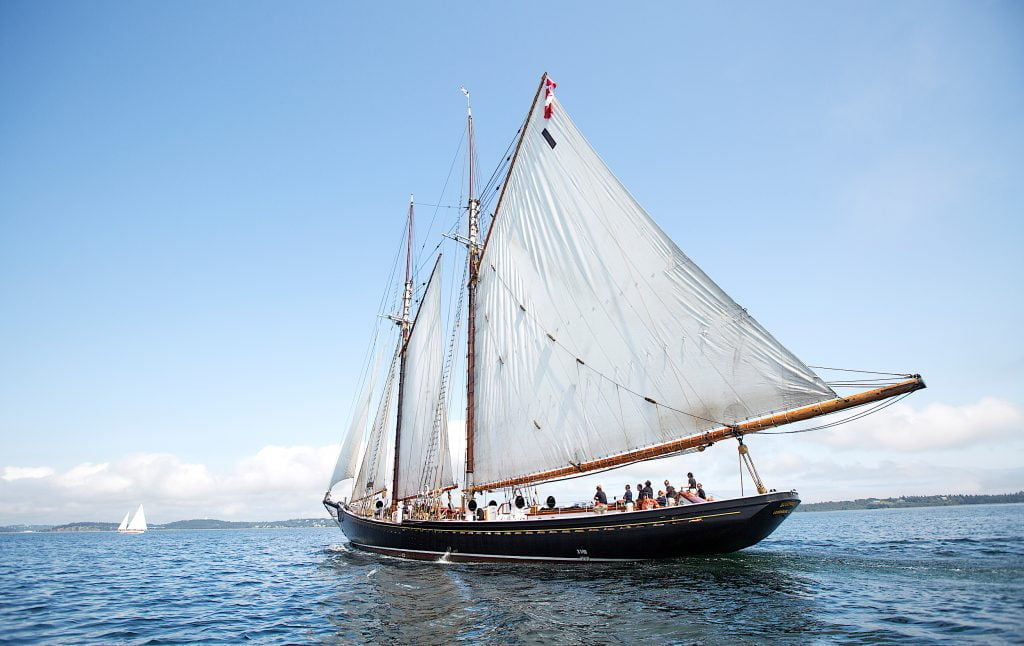 The Bluenose II sails off the coast of its home based in Lunenburg, which will be the epicentre of centennial celebrations for the famous schooner in 2021. (Photo by Len Wagg/Communications Nova Scotia)

On the waterfront in Lunenburg, an hour south of Halifax, there’s a calm that bursts with anticipation. Canada’s favourite ship, the Bluenose II, is resting easy on her lines. A few of the 20-person crew putter about, prepping for her 2020 schedule dubbed the “Sail Past Summer.” She’ll voyage to close to 26 Maritime communities, mostly in her home province. While that plan is notable, the exciting part about this circuit of short appearances has to do with what’s to come. The schooner’s tour is just the warm up for 2021, the 100th anniversary of the launch of the original Bluenose.

“Your heart skips a beat when you see her for the very first time,” says Stephanie Miller Vincent, coordinator with the South Shore Tourism Co-operative. “Even people who have never been to Nova Scotia and have seen the Bluenose, whether it’s on the dime or in a port close to them, have this magical connection.” 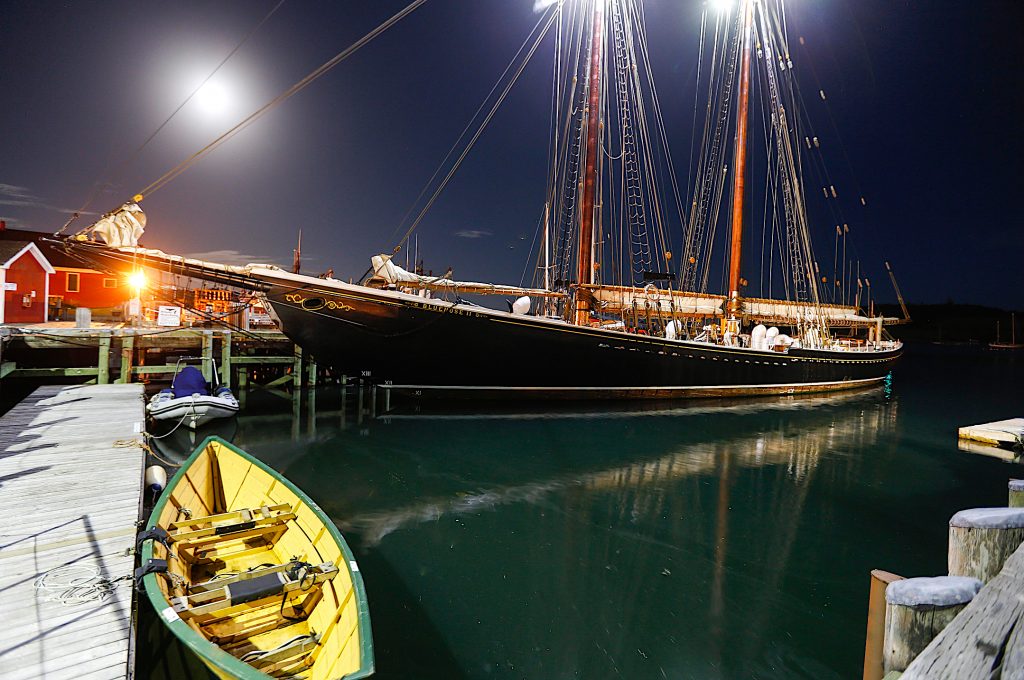 Day or night, the Bluenose II is an eye-catching and enduring attraction in Lunenburg’s habour. (Photo by Len Wagg/Communications Nova Scotia)

Celebrations kick off in Lunenburg in March, with a birthday bash when the Bluenose II will be offering 100 cruises — 60 of them in Lunenburg — each with a themed story about the great racing ship. Celebrations peak in a centennial festival from August 19-22.

For nearly two decades after her launch, the Bluenose won nearly every International Fisherman’s Cup awarded to the fastest-working fishing schooner. She raced many challengers, mostly those designed and constructed in New England to steal the cup from her. In 1938, she won the last such competition, making the Bluenose the reigning champion forever.

“It’s always a positive story when the underdog wins,” Miller Vincent says, “like the ship from Nova Scotia defeating the Americans. That’s what fairytales are made of.”

Colourful kayaks are a common sight on Nova Scotia’s South Shore as Maritimers take advantage of their proximity to the sea. Paddlers often pull up to shore for a break and taste of local culture. (Darcy Rhyno photo for Vacay.ca)

At the same time, international dory races that began in the age of sail to test the mettle and strength of working fishermen, as well as small boat design, continue to this day. These little two-person rowboats were stacked on the decks of schooners like the Bluenose and launched when they reached the fishing grounds. Built by the thousands in towns like Lunenburg, they became as iconic as their mother ships.  South Shore rowers have won many of these contests. The J.C. Williams Dory Shop Museum in Shelburne — one of that historic town’s Museums by the Sea — tells the story of its unique design called the Shelburne dory. In the town’s heyday as a shipbuilding centre, just one dory builder, Sidney Mahaney, turned out some 10,000 of the little craft. Dories are still built at the museum today, and visitors can lend a hand in their construction.

Nova Scotia is Canada’s ocean playground — it says so right on every license plate — and the South Shore is where the kid in all of us can mess about in boats of all kinds. The region’s bold oceanfront, endless white sand beaches, quiet inlets, countless islands, colourful waterfront towns and villages, and wild lakes and rivers stretch from iconic Peggy’s Cove in the northeast nearly 300 kilometres (195 miles) to the busy fishing ports of Cape Sable Island in the southwest. Getting out on the water is almost compulsory on the South Shore. 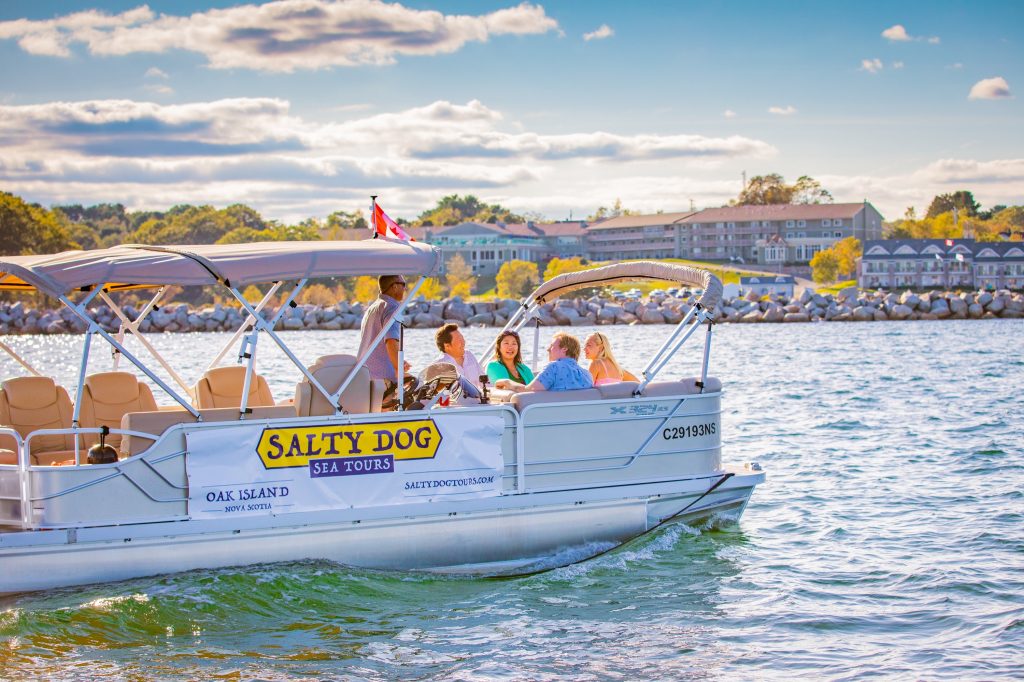 Nothing to curse about here — Salty Dog Tours takes guests out to explore the area around Oak Island, famous for its History Channel show. (Photo courtesy of Tourism Nova Scotia)

Book an excursion aboard a tritoon boat with Salty Dog Sea Tours for a narrated tour among the hundreds of islands in Mahone Bay and learn about the mysteries of Oak Island made famous by the popular History Channel show. Rent a kayak or take a tour with guide companies like Pleasant Paddling at Blue Rocks. Candlebox in Shelburne offers excursions along the South Shore, including at nearby Kejimikujik National Park Seaside, an adjunct of the inland park of the same name. Island hop with Cape LaHave Adventures to a private island hideaway in the protected LaHave archipelago for a glamping experience like no other. Bonus: it comes with a catered seafood dinner on the beach.

Where to Stay in the South Shore

A private island “glampout” is just the beginning of the many unique accommodation options along the South Shore. Set among the countless seaside cottages and classic stays like Oak Island Resort and White Point Beach Resort are shiny new gems like the B2 Lofts in Lunenburg. Inspired by the town’s shipbuilding history, these are modern, spacious apartments with views over the old town of Lunenburg — a UNESCO World Heritage site — or of the waterfront and harbour itself, perfect digs for making the most of the Bluenose’s centennial celebrations. For a quieter, but equally modern stay, the glass-front private balconies of The Lofts at the Quarterdeck Resort overlook Summerville Beach Provincial Park.

As timeless as ever, idyllic Peggy’s Cove welcomes visitors with charms and Maritime flavours. It’s a short drive from both Halifax and Lunenburg. (Darcy Rhyno photo for Vacay.ca)

“We appreciate the South Shore for those wide open spaces and that natural beauty,” Miller Vincent says. “Sometimes you can find all those things in one spot. We have campgrounds that allow you to walk straight to the beach. You can spend the day there, then hit up a local brewery in the afternoon or find a seafood meal that’s literally fresh off the wharf to your plate.”

Lobster is the runaway star of the seafood menu on the South Shore. More lobster is landed here than anywhere else in the world, and winter is the prime fishing season. Attending the great, February-long Nova Scotia Lobster Crawl is the best way to sample the endless options from Lobster Fondue at Capt. Kat’s Lobster Shack ($22) in Barrington Passage to the  delicious lobster rolls ($16.99) at the Peggy’s Cove Lobster food truck. For a taste of the truly unusual, try Crustacean Elation Lobster Ale at Salt Box Brewing in Mahone Bay. How about a scoop of Lobster Ice Cream at a few daring dining spots — verdict, given that lobster and cream are always good friends, it’s actually not bad.

Lobster rolls are a delectable ritual for any local or visitor to Nova Scotia’s splendid South Shore. Peggy’s Cove Lobster serves it up the way its meant to be. (Darcy Rhyno photo for Vacay.ca)

The seafood and those wide open spaces are the most obvious of the South Shore’s attractions, but Miller Vincent encourages visitors to explore the region’s hidden cultural riches. “For example, we tend to have very colourful houses because people often painted them the same colours as their fishing boats. It’s most noticeable in towns like Liverpool, Mahone Bay, Lunenburg, Shelburne and Lockeport.” She adds that the widow’s walk, a small railed platform on top of captain’s houses all along the coast, tells of the days when wives, girlfriends, and mothers anxiously awaited the return of fishermen from sea. One great way to learn about the widow’s walk and other unique architecture features found in the region’s historic homes is to register with Lunenburg Walking Tours. The Essential Lunenburg Tour ($25) is an hour-long and is full of  local lore that is tied to the 18th-century and Victorian architecture.

From the historic design of the Barrington Woolen Mill with its water-powered machinery to the contemporary Black Loyalist Heritage Centre that interprets the region’s link to the story of slavery and how free African Americans came to Nova Scotia in the late 18th century, heritage comes alive in South Shore museums and interpretation centres. 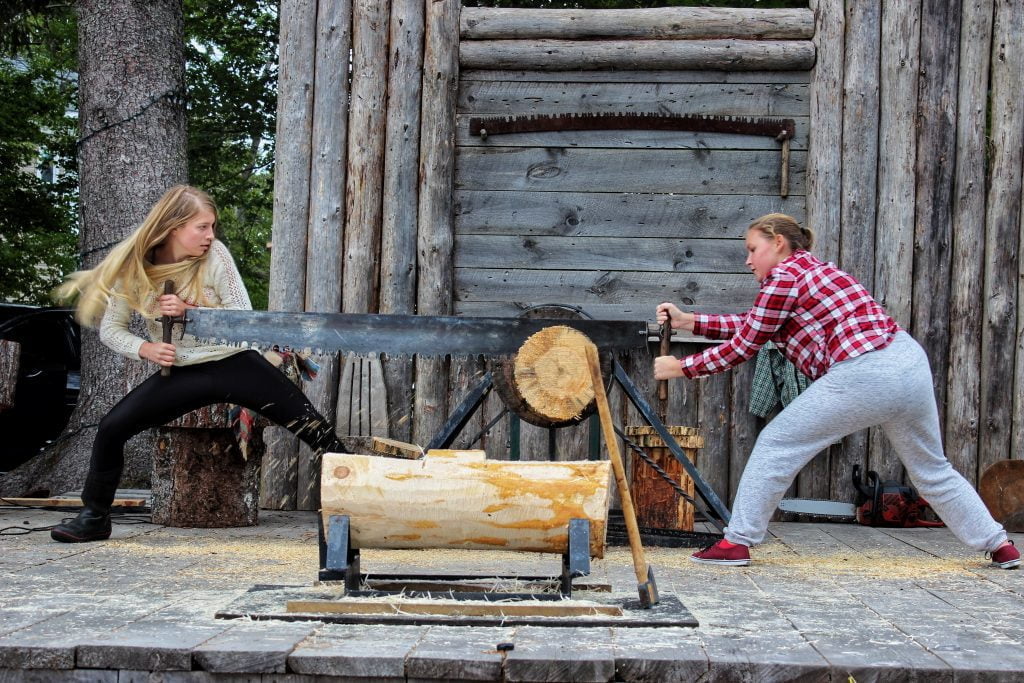 Put your lumberjack skills (and core muscles) to the test at Wild Axe Park in Barrington. Cross-cut saws provided! (Photo by Darcy Rhyno for Vacay.ca)

Visitors can learn about this heritage through unique experiences. To learn about the timber trade that supplied the shipbuilding industry, become a lumberjack for a day and try axe throwing and log rolling at Wild Axe Park in Barrington. Kids can dress up as Loyalists for a day at the Ross-Thomson House and Store Museum in Shelburne where they can learn 18th-century skills like candle making. At the Ross Farm Museum near New Ross, the whole family can play farmhand and blacksmith.

The most iconic of the South Shore cultural riches is the lighthouse. In fact, the coastal drive from one end to the other is called The Lighthouse Route. It’s bookended by Canada’s best-known lighthouse at Peggy’s Cove and by Nova Scotia’s tallest just off Cape Sable Island. Head to the Seal Island Museum in Barrington to climb inside a lighthouse and see the massive lens at the top.

South Shore lighthouses once guided ships like the Bluenose safely back to port. Today, they guide visitors along one of Canada’s most storied and beautiful coastlines.

Peekaboo views of the harbour abound in Peggy’s Cove, a dreamy destination photographers have adored for generations. (Darcy Rhyno photo for Vacay.ca)

The Oak Island Adventure with Salty Dog Sea Tours that includes a picnic lunch and a guided tour of the Oak Island Interpretation Centre with cast member Tony Sampson costs $195 per person.

The two-night LaHave Island Glamping Adventure with LaHave Island Adventures that includes seafood prepared for you on the beach, yoga on a stand-up paddleboard, and glamping costs $799 per person.

Note: Vacay.ca is partnering with Tourism Nova Scotia on a series of articles featuring journeys to enjoy in the province in 2020 and 2021. Check our previous article on road trips across the province. 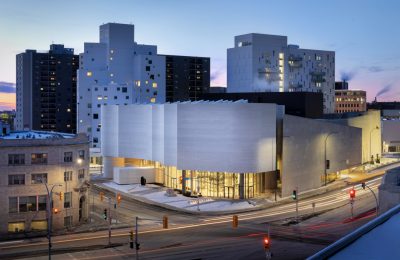 Escape from Home with Indigenous Experiences for Summer 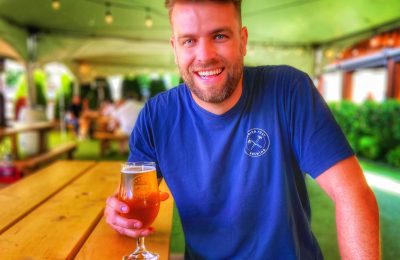 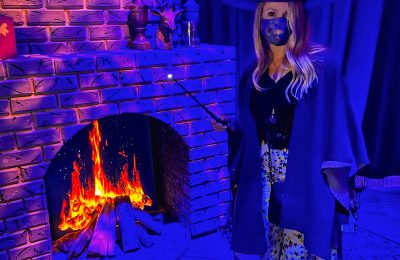 In Vancouver, a Sign of Normalcy In an Otherworldly Fantasy Treat