Manway, a rescued eagle, lands on the arm of a trainer during a show at the PNW Raptors experience in Duncan. (Adrian Brijbassi/Vacay.ca)

DUNCAN, BRITISH COLUMBIA — Vancouver Island has earned a reputation for its outstanding forest excursions, surfing thrills, and quiet time for romantics and explorers. It’s also a destination for families — particularly those with inquisitive kids who want to learn more about nature and the animals who live in it.

In the Cowichan Valley, the kid-friendly outings include an encounter with raptors, most of which have been rescued from the wild, and some mandatory splash time in the form of a fun indoor waterslide at a new hotel. Some cool hiking options are sure to get imaginations buzzing and a restaurant with families in mind will make certain bellies are satiated.

Here are four ways to enjoy the Cowichan Valley as a family:

Vacay.ca Editor Adrian Brijbassi spends some quality time with one of the residents of the PNW Raptors facility on Vancouver Island. (Photo courtesy of PNW Raptors)

Bird shows abound, but none I have attended feature the amount of education and heart as the PNW Raptors experience in Duncan. The operation includes eagles and other birds of prey that were rescued from the wild, rehabilitated, and trained. They help educate guests who visit the Raptors shows as well as industries in the Cowichan Valley whose activities may encroach on the habitat of many species. The bird show is big on teaching and also on interactivity as guests can put on a glove and have a falcon fly onto their your arm — something many kids would be keen to learn — or spend one-on-one time with several of the resident raptors.

The cider flight is for adults; much else at Merridale Cidery & Distillery is for kids. (Adrian Brijbassi/Vacay.ca)

You might not think that an establishment that specializes in making alcoholic beverages would be a great place to bring kids, but Merridale was built with families in mind. It has a fun trail where kids are encouraged to search for “faeries, dryads, hobgoblins, gnomes and elves,” while learning about life on a working farm. Set in a converted barn, the cidery’s restaurant features Sunday pizza night and non-alcoholic cider for the kids.

A hike on this historic attraction is a bit spooky, especially if the Pacific fog sweeps in, and a little nerve-wracking. The Kinsol Trestle was supposed to be part of a railway connecting Victoria to the northern communities on Vancouver Island. The project was started in 1920 but never completed. The foundation remains, with the railway trestle rising 44 metres (145 feet) above the Koksilah River. Hikers cross above on the wooden boardwalk, stopping at viewpoints to spy the scenery near Shawnigan Lake.

A waterslide is the highlight feature of the swimming pool area at the new Microtel hotel in Ladysmith. (Adrian Brijbassi/Vacay.ca)

Families will want to base their stay at this property that opened in summer 2018. The highlight is a waterslide and large swimming pool that will keep kids giggling for hours. The hotel’s rooms are also comfortable and smartly appointed. Located off of Highway 17 just north of downtown Ladysmith, the Microtel provides a base from which to access the Cowichan Valley and its attractions.

The family fun on a trip to Vancouver Island begins with a scenic BC Ferries ride. (Adrian Brijbassi/Vacay.ca)

Getting There: BC Ferries gives travellers multiple options for reaching the Cowichan Valley. Its terminals at Duke Point and Departure Bay are about 25 kilometres (15 miles) north of Ladysmith, the northernmost town in the valley. The Swartz Bay terminal, which is popular for those ferry passengers accessing Victoria, is about 50 kilometres by car (30 miles) from Mill Bay at the southern end of Cowichan Valley. Check ferry departures and routes at the BC Ferries website.

In Cowichan Valley, Life is Bountiful

20 Best Places to Travel in Canada for 2022: Time for Indigenous Tourism 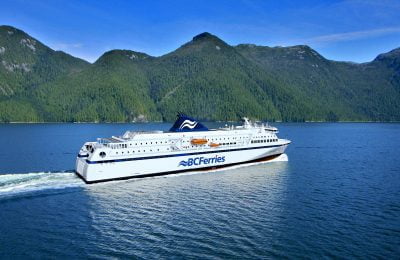 No Cruise Ships? No Problem for Travellers in B.C.’s Inside Passage

#Ireland is calling! Canadians are the No. 3 #tourism market for the Emerald Isle & there’s plenty of enticements to lure you to #travel this year. Check @GoToIrelandCA’s website. https://www.tourismireland.com/Marketing/North-America/Canada

Making summer #travel plans? Check our #Vacay20 Best Places to Travel in Canada for 2022 -- with a focus on #Indigenous experiences.

NEW: "Tee Up for These 3 #Golf Courses in Canada", incl. Cabot Cliffs in Cape Breton; @greywolfgolf in Panorama, BC; & @WhitetailGolf in the Ottawa Valley.