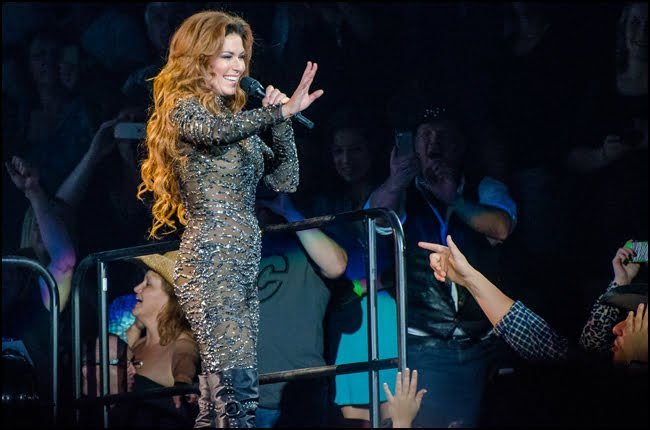 Shania Twain looked and sounded every bit the Queen of Country Pop during her two concerts at the 2014 Calgary Stampede. (Julia Pelish/Vacay.ca)

CALGARY, ALBERTA — Like the horses they love, Calgarians have demonstrated they can speed past trouble and race forward without looking back. When I visited the Calgary Stampede last week, people would position their palm at their waist, chest or above their head to show me how high the water was last year. They spoke, though, without an inkling of despondence. The flood of 2013 was something the city went through. Simple as that, for some. It was never going to cripple, or define, the place.

This year’s Calgary Stampede brought all sorts of great benefits to the city and its visitors, and among them was a further boot to the disaster, rendering it even deeper into the memory banks.

The 102nd edition of the Greatest Outdoor Show on Earth wrapped up on Sunday after 11 days of mostly glorious sunshine and temperatures that often topped 30 Celsius degrees.

The attendance numbers were greater than 2013, when the flooding of the Bow and Elbow rivers kept many visitors away, but less than the phenomenal 2012 centennial year, when 1,409,371 people came to Calgary‘s marquee event.

The Stampede annually accounts for about $340 million in economic impact and is responsible for about 25 per cent of the city’s $1.4-billion tourism industry. 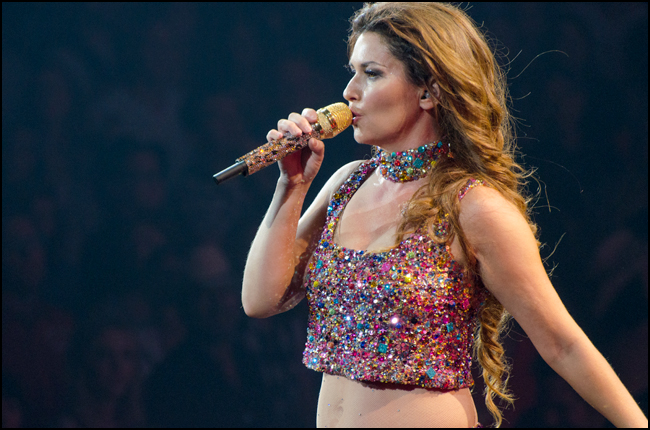 Shania Twain’s two nights of sold-out performances brought adoring fans to their feet at the Saddledome during the 2014 Calgary Stampede. (Julia Pelish/Vacay.ca)

My 5 Stampede Highlights of the 2014 edition were:

1. Shania Twain: Beyond the Vegas elements of her show (about as many costume changes as there were songs) and the polish of her performance, Twain gave fans at the Saddledome the feeling they were in a space far more intimate than a 14,000-seat arena. 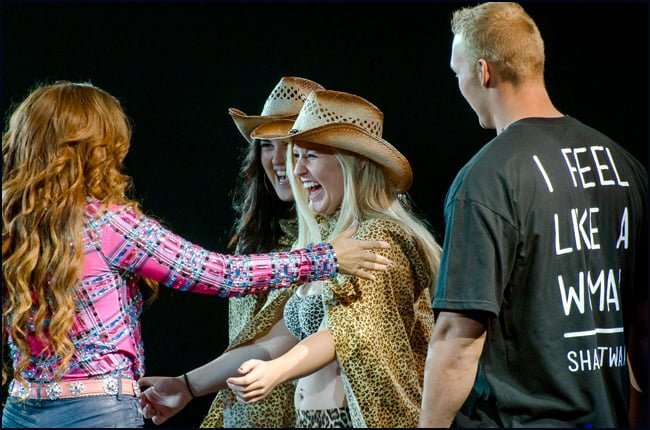 Shania Twain welcomes a few lucky fans from the audience to join her on stage for a campfire singalong during  Thursday night’s show at the 2014 Calgary Stampede. (Julia Pelish/Vacay.ca)

Her personal stories came across as truly heartfelt and her campfire singalong with a handful of audience members chosen on the spot for this “selfie with Shania” moment was a gesture more generous than you would expect from a superstar of her stature. Even as she was vamping around the stage in a leopard-skin cape and cowl, Twain insisted she was just a small-town girl from Timmins, Ontario — and because of the sweetness she shows you believe her. 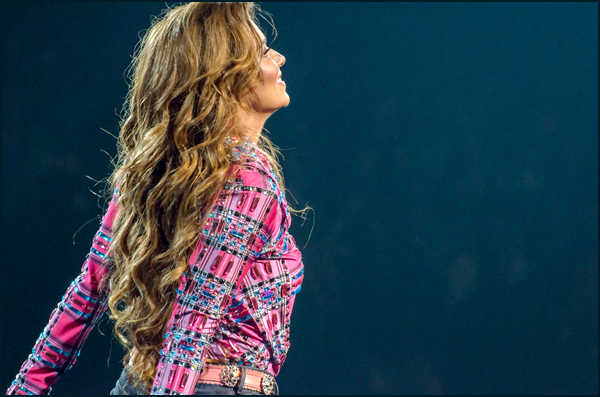 Shania Twain’s show combined Vegas glitz with Canadian country-western charm as she played a concert in front of her home nation for the first time in a decade. (Julia Pelish/Vacay.ca)

She was the first artist in the Saddledome’s history to sell out back-to-back shows and it was her first performance in Canada in more than a decade. Being in Vegas didn’t diminish her adoration for her home country, apparently. She came into the arena on horseback and dressed as a Mountie, while accompanied by an RCMP entourage. The only thing that could have topped that entrance was if she also hauled the Stanley Cup on stage with her.

Margaret Good Eagle of the Siksika Nation welcomes visitors to the Indian Village into a tipi decorated with artifacts from her ancestors. (Julia Pelish/Vacay.ca)

2. Indian Village: It’s separated from the zany midway rides and carnival games, but the Indian Village has always been an integral part of the Stampede experience. The First Nations groups that continue to return to speak about their way of life do more than just educate the rest of us. They give us a respite from the commercialism of the Stampede to ponder weighty topics and to peek back at history. Many of the items on display in the tipis within the Indian Village date to the 1800s.

Chuckwagon driver Kurt Bensmiller is seen here at the start of the race on Day 7 of the Calgary Stampede. He went on to win his first Rangeland Derby championship and the $100,000 prize. (Julia Pelish/Vacay.ca)

3. The Rodeo and Rangeland Derby: Standing on the rail as horses zip by in a blur is exhilarating. I can watch many rodeo events for a month and not tire of them. Never mind that I don’t completely understand some aspects of a chuckwagon race or that I’m in the camp that finds calf roping (or tie-down roping, as it’s officially called) cruel and difficult to witness, the Stampede rodeo is culturally significant to the people who participate in it, patron it or organize it. 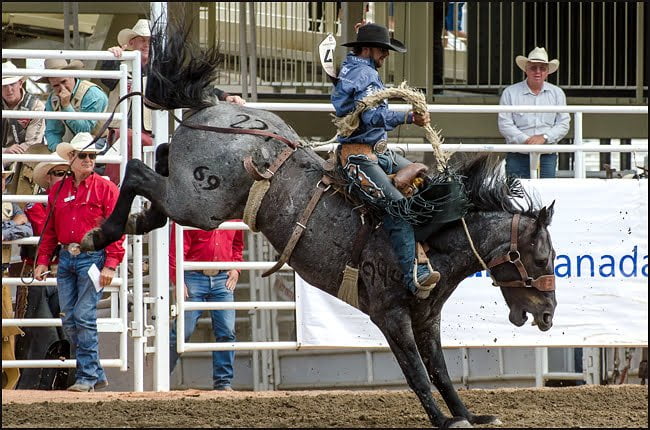 Wade Sundell of Idaho claimed the highest score in the Saddle Bronc performance on Day 7 of the 102nd edition of the Calgary Stampede. (Julia Pelish/Vacay.ca)

This is their thing and when you can suspend your judgment and realize how much passion they have for it, you start to understand the rodeo means a whole lot more than a few fun days of games at the track. At some point, Canadians need to contemplate the significance of making sure we keep western culture alive just as we have debated the distinctiveness of other regions of our country. Coming to the Stampede rodeo and getting to know more about the sport will help in that conversation. 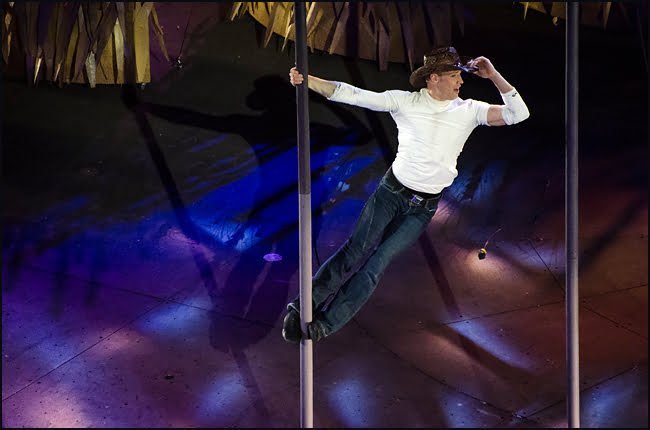 4. Timber Brown: A semifinalist on Season 8 of “America’s Got Talent,” Brown is one of the most unique performers in the world. His acrobatics involve climbing and twirling and hanging onto a pole in ways that make you think he must be using magnets or some other sorcery to defy gravity. He’s not. It’s the real deal and it’s mesmerizing to watch. At one point during the Grandstand Show in which he was featured, Brown clung to a pole with two fists while stretching his body out so he was parallel to the ground and about 12 feet above it. It’s the kind of thing you’ve only ever seen in comic book movies and with the use of CGI effects.

Stephanie Patterson, one the 2014 Calgary Stampede Princesses, enjoys the action of this year’s rodeo. (Julia Pelish/Vacay.ca)

5. Nashville North: The venue that’s party central on Stampede grounds is a riot. If you ever doubted country was cool or sexy, an hour in this cavernous night club will set your mind straight for good.

MORE ABOUT THE CALGARY STAMPEDE

2015 Dates: The 103rd edition of the Stampede is scheduled to take place from July 3-12, 2015
Website: cs.calgarystampede.com
Tickets: Adult park admission for 2014 was $16; children (7-12) pay $8; free admission for kids 6 years old and under.
Rodeo: Tickets to the rodeo usually range from $40-$267. Ticket prices include admission. Rodeo competition starts daily at 1:15 pm.
Packages: When schedules are finalized and performers are announced, visit the “Packages” webpage of the Stampede website for details on deals for shows, hotels, rodeo entry and Grandstand Show tickets. 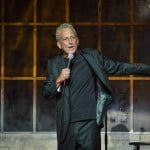 Just for Laughs ready to roar 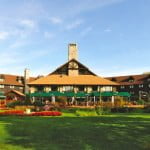 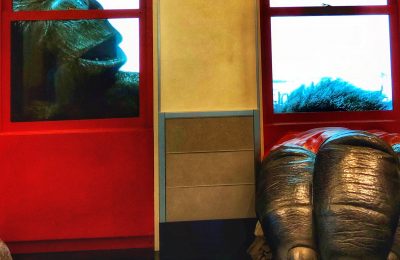 King Kong’s Encore Is Yet Another Wonder of New York 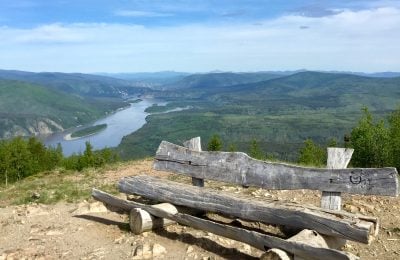 We are almost through February! How are your #spring travel plans going? We have a few great ideas in our #Vacay20 Best Places to #Travel in Canada for 2020 list! http://bit.ly/Vacay20Best

Another great read on #ValentinesDay from our archives: "#Osoyoos sets the mood for #romance" https://vacay.ca/2018/05/osoyoos-sets-the-mood-for-romance/