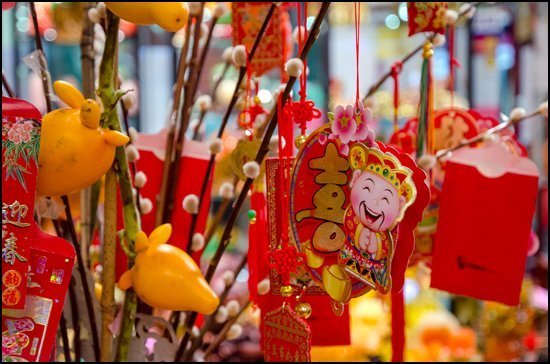 Trinkets for celebrating the Chinese New Year can be found at the flower and gift fair at the Aberdeen Centre in Richmond, a Vancouver suburb with thousands of Asian residents. (Julia Pelish/Vacay.ca)

In any culture, traditions are thick with meaning, but in the Chinese culture, I’ve discovered, symbolism permeates everything. Whether it’s the preparation methods used in making food, the number of a street address or the colour of a garment, there is much below the surface and lots to understand in the details. At this time of year, those of us from outside of the culture have the opportunity to peer into a Chinese celebration that sometimes mirrors and sometimes contrasts our western traditions.

In 2014, Chinese New Year  (or Lunar New Year) also known as the Spring Festival in China falls on January 31, the date of the year’s first new moon. Festivities will run for 15 days until the full moon on February 14. In Richmond, a Vancouver suburb that’s a pleasant 25-minute train ride from downtown, the celebrations are more alive than anywhere else in Canada. There are fireworks, big feasts, euphoric parties, and plenty of hopeful wishes.

At Aberdeen Centre, a Hong Kong-style mall one block from the Canada Line train station, a countdown celebration to the Chinese New Year takes place tonight (January 30) in the central atrium. Thousands of Richmond residents and visitors will fill the mall and no doubt indulge in the unique treats sold there. Revellers celebrate the onrushing Year of the Horse — said to be a particularly good time to travel — with ceremonial splendour and blessings from the Chinese God of Fortune.

When I walked through the mall this week, I learned about Hong Bao, small red envelopes and packages with new currency tucked inside. Married people traditionally hand out these envelopes to the unmarried so children are among the lucky money recipients. Special sweets and foods are exchanged between neighbours and family. Red is everywhere because it symbolizes luck and prosperity. One reason? It wards off the Nian, a mythical monster that is afraid of noise and the colour red.

Like I said, there is much to be gleaned from the details. Exploring Richmond is fascinating, because it is so familiar and yet so charmingly foreign at the same time. Of the 205,000 residents in the city, 65% are Asian, including 44% who are Chinese. You’ll find more than 400 Asian restaurants in the area, many of them serving Cantonese, Shanghainese and Hong Kong cuisine of a quality rarely found outside of the far east. Plus, there’s shopping, history, and a cultural education to be discovered — all conveniently close to one of Canada’s largest cities.

This photo from Aberdeen Centre was taken with a Nikon D7000 using a 16-85mm lens, set on f5.6, 1/40th of a second, ISO 720. It is a documentary-style photograph taken as a closeup to show the vibrant colours on display for the Chinese New Year celebrations.

Do you want to be a Photo of the Week winner? Simply email your submission to photos@vacay.ca (images should be sent as high-resolution JPEGs and captions should provide detailed information about the featured location) and your travel photo could get chosen and publicized — and you could win a great travel prize from Magellan’s travel supply company!

January 31, 11 am
Aberdeen Centre’s Golden Dragon and Lion Dance
4400 Hazelbridge Way
Following the lighting of firecrackers, watch the dragon and eight lions come to life as they welcome the Year of the Horse. The lions will also visit each store to perform the green ceremony.

A photographer who has worked in the largest media markets in Canada and the U.S., Julia’s travel photos and videos have been featured prominently in the Toronto Star and been exhibited in galleries in Toronto, New York and Vancouver. Her new line of photo jewelry was inspired by her travels. Even though she is an American, one of her favourite travel experiences was spending Canada Day 2000 on Parliament Hill, joining in a parade with then-Prime Minister Jean Chretien and others. Julia is Vacay.ca’s Visuals Editor. See her work at www.juliapelish.com/blog. 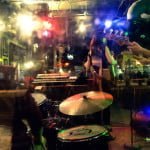 Edmonton has the Whyte stuff 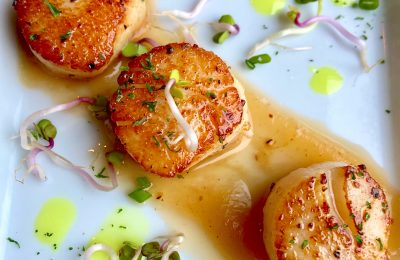 On the Acadian Shores, Scallops and So Much More to Adore 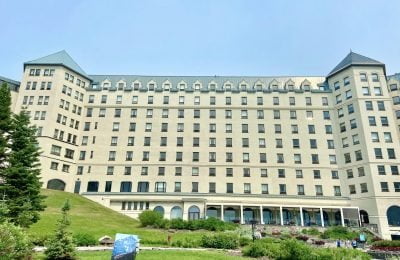 The Wonders of Wendake

It's almost Dark Sky Festival time in beautiful Jasper. Read what you're in for in this out-of-this-world event (happing Oct. 14-23 this year).