Isabel Bayrakdarian as Blanche de la Force in “Dialogues des Carmélites,” which runs in Toronto until May 25 at the Four Seasons Centre for the Performing Arts. (Julia Pelish/Vacay.ca) 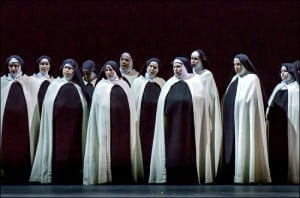 TORONTO, ONTARIO — France’s on-again off-again love affair with its monarchy and organized religion is the type of real-life drama that inspires great performances. Dialogues des Carmélites, a French-language opera written by Francis Poulenc, exemplifies how real life can produce exquisite pieces of timeless art. Based on historical events that occurred at the monastery of Carmelite during the first French Revolution, the play tells a tale of 16 Carmelite nuns who defied anti-religious decrees and ultimately became martyrs for their beliefs.

Dialogues des Carmélites has been staged all over the world and until May 25 it will grip audiences at the Four Seasons Centre for the Performing Arts, home of the Canadian Opera Company (COC). Lauded as one of the opera world’s finest masterpieces, it is not the first time the COC has staged this production in Toronto. In 1997, renowned Canadian director Robert Carsen grabbed the torch and provided a sublime interpretation of the opera, which is rejuvenated this month. His take on the wrenching guillotine scene, for example, is subdued yet its impact is powerfully felt.

And it’s not just audiences who are moved by the piece. Even after numerous performances, opera singers, such as Quebec-born Hélène Guilmette, continue to be stirred by the opera. “It’s a big gift to be able to do this production again,” Guilmette said during a phone interview. “It’s a very beautiful production and I am very proud to be a part of it.”

Guilmette plays the role of Sister Constance of St. Denis, a role she played two years ago on a much smaller stage in Nice, France. “With the experience I have had playing this role [each time] it grows in my body and in my mind. It’s a very deep and spiritual experience just to be part of this story,” Guilmette added.

Spirituality and devotion are at the core of this story. When we are introduced to Constance she manages to seemingly skip her way towards a table like a ray of sunshine among a sea of white wimples and grey aprons. Like a clairvoyant she tells Blanche de la Force (played by soprano Isabel Bayrakdarian) that she knows that they will die young and that they will die together. Understandably, Blanche is put off considering it’s their first meeting. Nevertheless, the two, along with the other nuns, form a lasting bond.

The minimalistic set and impressive cast of 161 performers are all part of the intrigue of this atypical opera. While those who grace the stage take precedence, an opera wouldn’t be complete without a splendid orchestra. The COC doesn’t disappoint. The music is melodious and is executed with precision. In fact, the magnificent interpretations of the songs Ave Maria and Salve Regina send chills down the spine.

Carsen’s production of Dialogue des Carmelites, although somber in its delivery, reminds us that opera can be moving life experience.

Sandra Williams-Hervé is a writer, actress, and producer who divides her time between Toronto, Canada and Paris, France. She was bitten by the wanderlust bug early in life and has visited just about every continent. After growing up in Ontario, she hopes to visit all of Canada’s diverse provinces.

Get refreshed in Montreal for $309

The Rise of Toronto Luxury Suites Over Airbnb

A story from our archives by @travelmammal: "Experience Soulful Acadian Life in New Brunswick" https://vacay.ca/2021/02/experience-soulful-acadian-life-in-new-brunswick/

Great news from #Stratford! @StratfordON says the Bacon and Ale Trail is back and better than ever with 15 delicious stops (with more to come!) and new experiences.
https://visitstratford.ca/bacontrail/

Another wonderful reason (not that we needed one) to head for the east coast! From our archives:
"At Rossmount Inn, Chef Chris Aerni Celebrates All Things New Brunswick"
https://vacay.ca/2021/05/celebrating-new-brunswick-is-what-chris-aerni-cherishes/ #ExploreNB