The Trans-Canada Highway is celebrating its 50th birthday in 2012 and the centennial anniversary of the first coast-to-coast road trip made in the country — accomplished by Thomas Wilby and Jack Haney, travelling from Halifax to Victoria. Vacay.ca writers have hit the road to come up with great tales to tell along this vital and historic route. Last time, Katie Marti suggested tips on how best to see the British Columbia leg of the route. In the second installment, she takes a look at Alberta.

DRUMHELLER, ALBERTA — Driving across Alberta on the Trans-Canada Highway is easier said than done, not because the drive is particularly treacherous or cumbersome, but because there are so many things to see and do that it’s tough to keep your eyes on the road. To go from Point A to Point B without making little detours or stopping altogether is asking someone to avoid temptation. It’s a province full of contrasts, from its winding mountain passes in the west to its expanse of flat prairie highways in the east, and I love every inch of it. If time permits, going out of your way in Alberta is highly recommended.

The following are 5 recommended pit stops along this leg of the Trans-Canada Highway:

1. Grab breakfast in the Rockies. You’ll find a stop at the Rocky Mountain Bagel Co. in Canmore is a good way to start the day. Coffee is local, the atmosphere is cozy and the bagels are well worth the time it takes to get off the highway and find a parking spot. Everything is made on-site and the result is a reputation that runs the entire length of the TCH.

2. Tour Banff. The Fairmont Banff Springs Hotel is the landmark property that you will want to serve as the base for your visit. The whole town of Banff feels like a living, breathing museum of Canadian history and geography, located in the heart of UNESCO World Heritage Site Banff National Park, and the iconic hotel has itself been named a Canadian National Historic Site. Stroll the majestic grounds and stop by Bow Falls, featured in Marilyn Monroe’s classic 1953 film River of No Return. If you’ve got a four-legged friend on board, the gravel trails that surround the hotel are a great spot to get out for a walk. And if all you do is stand in the lobby and marvel at the old-school luxury of it all, that’s just fine too. (Oh, and it’s supposedly haunted, which makes it all the more fun.)

3. Lunch in Lake Louise. Whether it’s a snack at the deli inside the iconic Chateau Lake Louise hotel or a picnic lunch on the side of the lake itself, getting off the road and into the postcard scenery that abounds is a fantastic way to break up your drive on the TCH. The combination of pristine water, glacier reflections and crisp mountain air are enough to rejuvenate even the groggiest of road warriors.

4. Walk among dinosaurs. About halfway across the province and an hour off the highway lies Drumheller, home of one of the world’s richest deposits of fossils and dinosaur bones, as well as Canada’s prized Royal Tyrrell Museum. Even getting to the town itself is a treat as fields of wheat and oil derricks give way to dusty coulee landscapes and hoodoo rock formations across Canada’s Badlands. The museum is awe-inspiring with its full-scale T-Rex skeleton and more than 110,000 fossil specimens, and the grounds surrounding the building are lined with trails, great for giving road-weary legs a stretch and exploring the Badlands on foot. 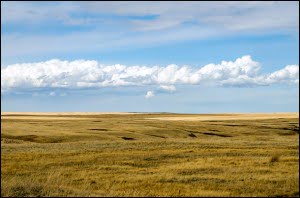 The endless horizon and fields of gold abound in Hanna, Alberta. (Julia Pelish/Vacay.ca)

5. Photograph, photograph, photograph. Capture the spirit of the Trans-Canada Highway by pulling over and snapping a few shots of the huge swath of green and gold that blankets the prairies for 200 kilometres east of Drumheller. When that Canadian Pacific train rolls through, splitting field and sky in a streak of red, it’s next to impossible to take a bad photo and no cross-country road trip photo album is complete without it.

Alberta really does have it all when it comes to variety and contrast. From the commanding presence of mountains and glacier lakes to the humble beauty of prairie fields and farms, there are photo ops and pit stops from one end to the other. Next time you find yourself road tripping across Alberta, skip the cruise control, take your time and enjoy this ride that’s both magnificent and sublime.

Have you got a great photo to share or story to tell about the Trans-Canada Highway? Share it with Vacay Nation! Email it to us at editors@vacay.ca and we’ll publish it during this 50th anniversary of the highway, which opened on September 3, 1962 in Rogers Pass, British Columbia. (Photos should be sent as high-resolution  JPEG images.)

Hear the roar in Waterloo for $209

It's time to take Saskatoon seriously

The Strange and Magical Wonders of Dawson City

Today is #TitanicRemembranceDay. Read this story from our archives about the tragedy: "In #Halifax, #Titanic memorabilia rises to prominence"
https://vacay.ca/2012/04/in-halifax-titanic-memorabilia-rises-to-prominence/