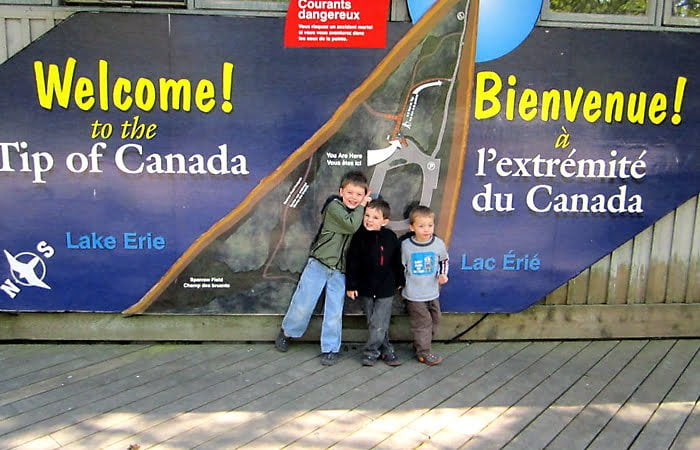 You can’t get any farther south in Canada than Point Pelee, as the three Keck boys happily discovered. (Nicole Keck/Vacay.ca) 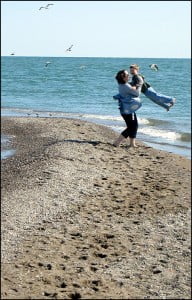 Writer Nicole Keck and her son Finn get a thrill out of Point Pelee’s “tip”. (Photo by Robert Keck)

LEAMINGTON, ONTARIO — My husband an I are not birders, but we took our three sons (ages six and under) to Point Pelee National Park in the second week of May during the Festival of Birds, an annual three-week event with special speakers and guided hikes. We did not take advantage of those group activities because we had the kids with us. Instead we did our own exploring of this triangular peninsula that covers the southernmost inches of Canada.

As we strode the well-groomed trails, we were the outnumbered species as a steady symphony of birds, thousands strong, sang above our heads. Squinting up into the canopy of the trees, we spied for the birds whose songs were ringing into the sky. It was then that I realized the value of the canvas-brimmed hats, binoculars and wide-angle cameras toted by the serious birders. Those visitors to Point Pelee were happy to share the experience with us less-than-hardcore bird gazers and our boisterous boys.

Point Pelee, more than four hours southwest of Toronto and an hour east of Windsor, is a place of perpetual change in terms of its geography and migrating creatures — both avian and insect — who find respite in its Carolinian forests. The park extends seven kilometres into the western basin of Lake Erie. The peninsula gradually narrows into what is referred to as “the tip,” where visitors can stand barefoot in the coarse sand and be almost completely surrounded by water.

For birders, spring means the return of waterfowl — ducks, geese, grebes and loons. By the end of April, songbirds arrive and move quickly through the park on their way to breeding grounds. Although the first three weeks in May are the best time to see warblers, vireos, tanagers and orioles, it’s in June that the migration continues with flycatchers and shorebirds. The species that nest in the park have established territories where they raise their young.

A Natural Playground in Ontario

During our visit, our sons were disappointed to find out we weren’t going to a playground and challenged their parents’ definition of the word “park.” Explaining that it was a “natural playground” didn’t seem to ease the blow, so we let them loose to do what they do best, run and climb. First we scaled the wooden lookout tower, then walked the one-kilometre floating boardwalk through the marsh, sighting fish, frogs, turtles and, of course, birds. The kids had a blast, but our middle, “tell it like it is” son felt the need to add, “I still don’t like that you call this a park.” Sigh … as poet John Lydgate declared, “you can’t please all of the people all of the time.” (I have a hunch Lydgate had children.)

Later, at the visitor centre, we enjoyed the hands-on activities for the kids, including exhibits, animal costumes and cool stuff to look at through a microscope. From there, we took the  shuttle for a 2.5-kilometre ride to the tip. Walking and shuttling are your only two options south of the visitor centre; cars are not allowed to drive any farther for the sake of preservation. But the shuttle will drop visitors at a midpoint station if they would like to hike for a bit. The free shuttle runs every 20 minutes, April through October.

At the end of the shuttle ride, we perused the outdoor exhibit before the sound of lapping waves and the bright sunshine piercing the forest beckoned us onto the trail. It’s about a five-minute walk from the shuttle drop off to the tip of the peninsula. As the sound of the lake grew louder, our steps quickened. Before we knew it, the soil and roots beneath our feet gave way to sand and the trees above yielded to the bright blue sky. Instinctively, we all ran for the waves, kicking sandals off along the way. We practiced  skipping rocks and played on the large branches laying on the beach. Our attention then turned to the pile of boulders that practically screamed, “Boys, we dare you!”

I’ll admit, I couldn’t resist either. Soon, we were all scaling the rocks. Once on top, it felt like we were perched on our own little island, surrounded by a sapphire sea.

All that was left was to tiptoe through the rough sand and venture out onto the tip (but no farther — signs are posted warning of strong tides). Being out there feels like standing at the edge of the world — a point of land behind you and nothing but water all around, the fresh, moist air cooling your face and whipping your hair. It’s a feeling of freedom, of wanting to fly like all those birds around us.

And our boys must have grasped the “natural playground” idea because while we explored the beach they declared it “the best day ever!”

When it was time to take our tired, hungry boys back to civilization, we shuttled back to the van and set out in search of food — any food. What we found was Freddy’s Cocktail Lounge and Restaurant at 655 Point Pelee Drive in the town of Leamington. It’s a gem of a place with a lovely, comfortable-looking patio surrounded by tropical plants.

We had our fill of sun and wind for the day, so we headed inside where we found a much nicer interior than we had expected for a beachside hang out. The family-owned business has been there for more than 20 years and is run by Michael and Robert Makhlouf, Freddy’s sons. (The business has a great story behind it that you can read about on Freddy’s website.)

The moderately priced menu includes lightly breaded Lake Erie yellow perch ($15.99) that is pan fried in herb-garlic butter. The dish has won accolades and my husband agreed it was among the best perch he has ever eaten. Freddy’s also serves Lake Erie pickerel ($15.99) and a selection of Lebanese favourites. I had the marinated fried chicken ($12.99), a weekly special, which was fantastic. Freddy’s has a typical children’s menu, a wine list that includes many local selections and live entertainment.

We only spent one day in the area, but Point Pelee National Park has a lot going on throughout the year. If you go, consider planning your trip around the migrating schedule. Our next journey to the area will include a visit to Pelee Island, a municipality with year-round residents and plenty of visitor activities, and likely a return trip to Freddy’s.

Nicole is currently a homeschooling, stay at home mother of three young boys, (a.k.a. the three stooges, the little rascals – you get the picture.) Her passion for writing was sparked at a young age when an English teacher said, “It is a noble thing for one to have command over his or her own language and to use it for good.” Nicole studied at Oakland University in Rochester, Michigan and before the children came along, she and her husband enjoyed active travel such as hiking, backpacking, canoeing and kayaking. The detailed journals and poetry she wrote during those adventures remain among her most treasured possessions. You can read more about Nicole at nicolekeck.com. 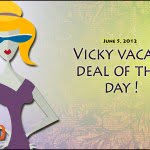 Pay up front and save 15% in Winnipeg 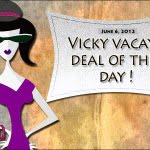 $299 for a whale-watching adventure in Victoria 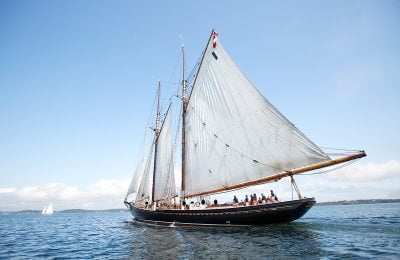 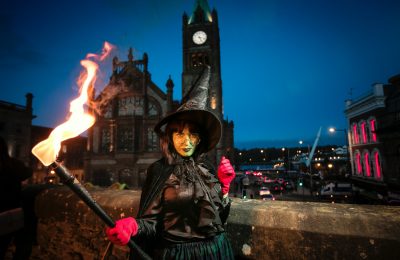 At Halloween, Canadians Embrace Traditions that Originate in Ireland 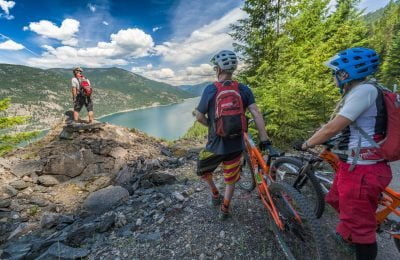 NEW: "'#Bridgerton' Fans Will Be Hot for a Trip to Bath". Check our sister magazine, @VacayNetwork, for its article on the show's filming locations in the England city. http://bit.ly/VacayBridgerton @visitbath

A timely @TerroirTalk for anyone who has trained or worked as a chef -- "The Chef Pivot: Where can you work in the world of food"
is live Tuesday, March 2 at 1pm EST. https://terroirtalk.org/upcoming-talks #gastrodiplomacy @reneelalonde11

In honour of the 2021 #RCShow (Feb 28 - March 3) read our interview with David Lefebvre of @RestaurantsCA: "‘It’s Going to Be Carnage,’ Restaurants Canada Exec Says About COVID-19 Impact’
https://vacay.ca/2020/04/its-going-to-be-carnage-restaurants-canada-exec-says-about-covid-19-impact/